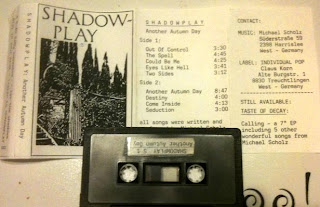 Shadowplay was the solo project of Michael Scholz, nowadays best known as the singer of cult 80s goths Taste of Decay. However, quite a few years before I ever heard or read about Taste of Decay... there was Shadowplay (not to be confused with the US band I posted last week, the Finnish band, or others sharing the name). Naturally there are some very similar Taste of Decay sounds, but perhaps a bit more introspective at times (it is a solo project after all). Michael mentions influences by Joy Division, Bauhaus, Sad Lovers & Giants, and Danse Society... though the Bauhaus influences comes out heavily on the vocals at times, and there is certainly some big-time Cure influences here-and-there. This is nothing groundbreaking, but certainly good quality DIY underground goth music, especially for being a debut cassette-only release. The title track is probably my favorite on here, though know I had this tape for a couple years before the song I ever grabbed my attention, "Come Inside" is a dark analogue synth track, and there are quite a few other decent tunes as well.

Michael also sang for Garden of Pleasures (best known for their track "Pandora's Box" off the New Alternatives LP) from '87-91, and has been involved in a few other bands (even pre-Taste of Decay). For more information on some of his projects, check out his way out-of-date website: http://home.foni.net/~michel/shadowplay.html

Myspace here for some more info and random tracks including a newly recorded version of "Out of Control" off this tape: http://www.myspace.com/shadowplaygermany