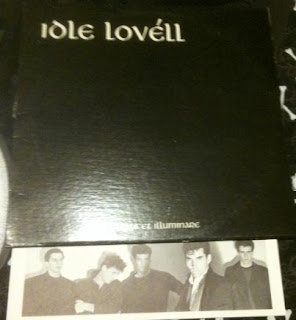 Idle Lovéll were a gothic / dark wave band from the Los Angeles region that only released this record. They included Michael Knott on vocals, who I had never heard of before, though he has quite a massive discography beginning with the early 80's punk band The Lifesavors... and is apparently a well-known figurehead in alternative Christian music. This is the first and probably last "Christian" record I'll ever post on here... hehe, normally not the stuff I seek out! However, I wouldn't let that discourage anyone from checking it out since it contains many excellent tracks. The better tracks remind me of some songs by bands such as South of No North, Art Boulevard, Necropolis of Love, or tracks such as "Out of The Window" by Aerial FX, etc... "Shallow" and "Only" are very good dark wave tracks, "Drone" is gothy, "I Can't Wait" is dreamy, "One-Sided Love Affair" has a jangle-pop vibe, and "Touch Me In The Wind" is my least favorite since it has a lame "radio-friendly" sing-a-long chorus. Overall, very good stuff if the religious overtones don't pester you.