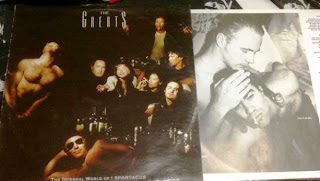 If you would ask me what my favorite Australian record is, I might reply "Crank" by I Spartacus some days. I doubt if I Spartacus were intentially going for a "gothy" sound, but that 12" surely is private press bliss if you're into that sort of stuff. This is the follow up to that EP, and their final release. The first time I ever noticed this one on eBay, the seller had it listed as "The Greats - The Wonderful World of I Spartacus", which is how I would interpret it as well if I simply saw it in a shop and just glanced at the cover. Naturally, this left me scratching my head since it was Australian and from the same era, and luckily someone I knew purchased it and later confirmed it was the same band.

This LP certainly took longer to grow on me than the "Crank" 12", probably due to the fact that I had such high expectations that it would essentially be a continuation to that release. There are a few tracks that could have been outtakes from that EP ("The Greats" and "Part of The Art of Eve"), though this LP is certainly a bit more varied. "Cut Me Down" and "Drumheart" both have dancefloor potential. There are some slower tracks too ("The Strangest Life", "She Has No Tears", "Beautiful Again", and "Godsmoke")... as well as some short instrumental interludes.

This release is quite rare, apparently the singer grew tired of transporting several heavy boxes of unsold LPs every time he moved house (claiming "often"), and left his stash of LPs in an alley outside a house that he was moving from. Surely most, if not all, of those LPs were probably destroyed. I Spartacus were from Syndey, and the singer (Jack Marx) is now a well-known journalist and author. You can read Jack's own account of I Spartacus here. If you look around on youTube, there is a live clip by them performing the first two songs on this LP from the early 90s (maybe their last show?). Check above for their debut 7".


Get this LP + the 7" (posted above) below (I stuck them together on accident when doing a reupload)
http://netkups.com/?d=8e1adea90f58e
pass: kentuckyfriedwave