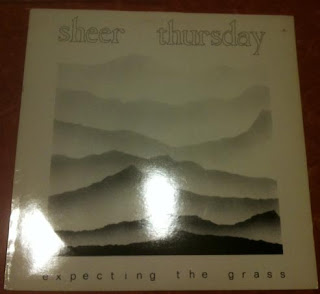 When I have noticed this record up on eBay in the past, sellers often compare them to early R.E.M., which is certainly obvious on some songs and both bands were from Georgia (different cities -- Sheer Thursday were from Atlanta / R.E.M. --> Athens). Besides the R.E.M. influences, they also have some excellent gloomy darkwave tracks like "Gray Day", "A View From The Side VII" (beautiful), and "Distance" that are the standout tracks to me (and anyone with similar tastes). You also have some straight-forward uptempo post-punk tracks ("Moral", "Home Park", and "In View From The Side"). There is another release I've seen that is a '85 7" called "He Leaves" that is probably the same band, but have yet to ever hear it or had anyone else refer to it to me... so can't be 100% sure... if you know for sure, leave a comment. The first four tracks on here were recorded in Nov.-Dec. 1985, and the remainder in May-June '86. This one can often be found quite cheap online too, which is another plus.

Shadowplay - The Camp of The Saints LP (1989, Shadowplay Records) 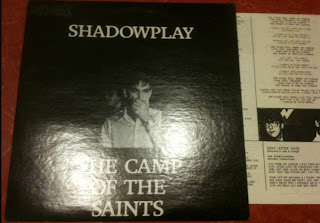 By glancing at the cover of this record, you might be expecting to hear the ghost of Ian Curtis once again, but not quite. There are some Joy Division influenced tracks ("The City On The Edge of Forever" -- sounds like the JD-influenced Grey March tracks), but overall I am reminded of bands such as New Math, mid 80s Kommunity FK, or even Fourwaycross at times. Mildly gothic, US-style post-punk / dark rock, deathrock-crossover. This Shadowplay (quite a few bands with the same name), were from the small city of Everett, Massachusetts (north of Boston), and consisted of Peter Odd and Robert Belvedere (pen name). Peter (maybe a pen name too?) and Robert started playing together in James Straight & The Bureaucrats in 1979, and apparently played in other Boston-area bands throughout the 80s (Shocks & Struts, Beach Party Syndrome, Kalvin Kooledge, Red Tape, No Smoking, World Citizens and minimal synth legends Doppler Effect) according to one eBay seller who recently posted this one for sale (not sure if they played together or seperate in all of those bands! -- but would imagine not together in all). A quick google search reveals Mr. Belvedere nowadays runs a self-proclaimed right-wing Political blog at http://thecampofthesaints.org ! Nevertheless, some decent tracks... and all songs recorded between July-Aug. 1988.

Shadowplay - The Camp of The Saints LP (1989, Shadowplay Records) 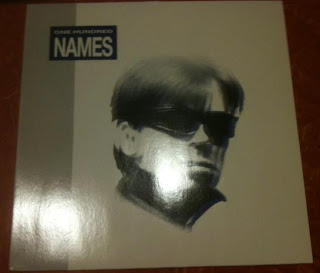 Cool German goth band that only put out this 12" on Wishbone Records, best known for releases by Marcie's Still Waiting and No More. Don't know much else... but good stuff. 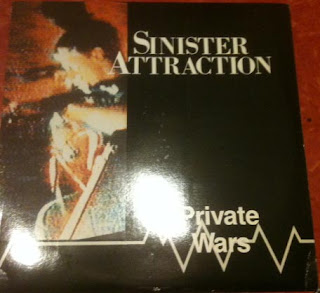 Late 80s US dark electro band from the Pittsburg, PA area and off the Nailed To Sound label (ran by members of Batz Without Flesh). "Sleep of Dreams" and "Control" are heavily Skinny Puppy-influenced, "/'nəth-iŋ/" and "NTT" are slower with a bit more gothic/darkwave atmosphere, and "Dead To The World" is in Klinik-territory. They would have fit in on the "Grindstone" compilations put out by K.O. City Studio (Data-Bank-A, Dominion) during the same time period. Discogs also has two other cassettes listed, and some more videos are on youTube from their cassettes. 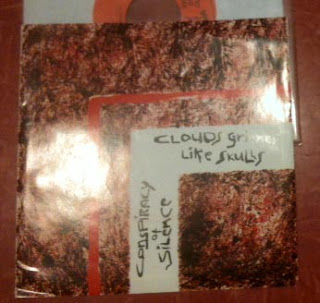 Obscure Dutch band that I don't know much about. The track "Mother" is a great song that reminds me of the Sister of Mercy's "Marian" with a stronger indie touch... sure to be an obscure "YouTube" hit with time. The two songs on the b-side have a guitar wave/indie/post-punk sound to them, not bad. I'm not 100% sure what the correct title to the last song is... it is listed as "Innocense" on the picture sleeve and "Innocent" on the label. Who knows?

Conspiracy of Silence also had a track on the '89 K7 compilation "10 Jaar S.P.M.J. Rhythmsticks" available at the No Longer Forgotten Music blog here. There are a couple compilation apperances listed on discogs for this band too, but I have my doubts that all of them are in fact the same band. The 1990 Dutch 2xLP compilation "Some Corrupt Not Self-Programming Dee-Jays" is likely correct. 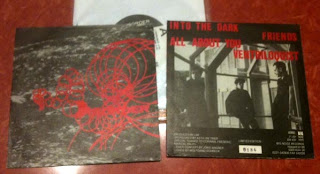 German darkwave band active in the early-mid 90's, also sometimes known as "The Disorder". Here is their only vinyl release, a 7" limited to 200 hand-numbered copies. The band began on Big Noise Records (later to become the popular 90's German Goth/Electro/Darkwave label Dion Fortune) releasing a S/T K7 and this 7" in 1991. In 1993, they self-released the "Amnesia" CD which contains many of the elements found here with a bit better production and some stronger electronic influences creeping in on some tracks. Following this they put out two more releases in 1995 that I have never heard or seen anywhere for sale: "Inspiration To Hamlet" K7 and "MoveDown" CD/K7. They also appear on quite a few compilations, such as their excellent contributions to "Behind Mysterious Gates (The Vicious Circles)" CD (1992, No Control Torture) and "Cascades" K7 (posted below)... to name a few. Band member Manfred Thomaser went on to synthpop/electropop bands Distain! and Arsine Tibé. I've been looking for their first tape since around 2004, but have only ran into it one time back in 2006 (and the seller would not ship outside of Europe when I contacted him)

Their early sound is quite alike many underground German wave bands from the early 90s explosion... fits in nicely among Visions of Domino, Dusk To Dawn, Fields of Winter, No Critics, early Prophet O'Haphazard, Elephant Castle, etc. This 7" starts off with "Ventriloquist" containing some synthpop undertones and backing female vocals, "Into The Dark" is DARK and will probably be the standout track to most. "All About You" is a ballad, and "Friends" has a whispery minimalistic sound. 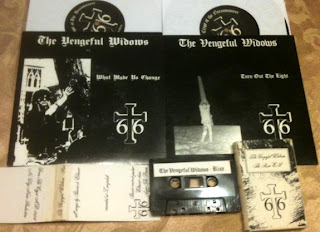 Someone requested some Vengeful Widows on here couple months back, so here are the releases I own. A bizarre late 80s-mid 90s UK goth entity playing primitive, lo-fi, dollar-bin drum-machine,'82-83 period Sisters of Mercy-influenced tracks mixed with the doom/gloom weirdness of bands such as Dass causing them stand out a bit from the typical Eldrich-obsessed nuts (and eliminating any chance in hell for commercial success even in "goth" circles). The main member was Gavin Blackwidow, the K7 I have has Elanor on bass, and Mick Mercer's Gothic Rock book mentions a member named Libby (drums, chimes, occasional vocals), along with Suzie the Doom Machine. All of their releases appear to have been self-released on their own label Crypt of the Necromancer, and after two 7" singles, the remaining releases were cassette only. Naturally, all of their releases are quite hard to come by, and there isn't a great deal of information out there on the web. Besides these releases, they also had the following tapes (and quite possibly more): "S/T", "Cry", "The Dark", "The Violet", and "Cross Sexion" (seen this one referenced in a zine, but never heard/seen it...). Mick Mercer's Gothic Rock books claims they formed in '87 in Liverpool, but didn't get around to actually writing music until they moved to Stourbridge in '89. The Hex Files book released in '96 writes, "I have yet to meet anyone who has seen these late 80's hermits. In fact it may all be the work of one man but there are still two charming singles and five separate demos available. Bedsit Bauhaus, sofa-bound Sisters."

The Vengeful Widows - What Made Us Change 7" (1989, Crypt of The Necromancer) 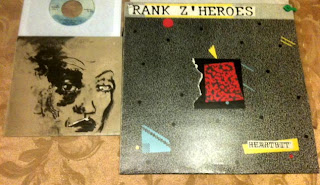 Rank Z'Heroes were a Belgium band that put out three releases (the first two included here). I've never picked up the 3rd and final 12" from '86, "Need A Slave"... so no clue how it compares to these. The first 7" ('83) is certainly the coldest, reminiscent of many French coldwave bands from the time period... though the title track is sung in German. The "Heartbit" MLP ('84) is a bit more produced and varied, the French mailorder Superdisques writes "rare mini lp of complex cold by this belgian band remembers a bit minimal compact"... The A-Side of the MLP is nothing outstanding for me, but all three songs on the B-Side are dark post-punk/cold. 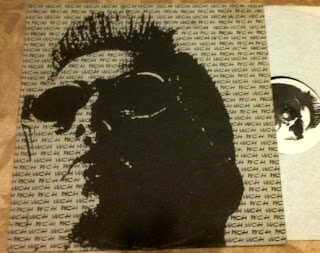 WCH (Working Class Heroes --> sounds like a skinhead band!) were a short-lived dark/cold Belgium band that formed in '84, released this single 12" (also off the Big Heat label such as the Rank Z'Heroes MLP posted above), and then vanished. Good stuff with some throaty-vocals, though the last track is a bit silly. One of several compilation tapes put out by Beton Tapes spotlighting some of the then current underground goth, darkwave, and dark electro bands in Germany during the early 90s. Beton Tapes was formed in 1990, and ran by Alexander Pohle who now does the minimal label NLW, along with the Back Again zine (amongst other things). He also had another tape label called Gorkon Recordings in the 90s too. If the label's catalog numbers are correct, Beton put out well over 100 cassettes, though I have only been able to uncover maybe around 50-60 of these (so would love to see a complete list of tapes if anyone has this available! *wink *wink). Some years ago, I got a handful of emails from Sopor Aeternus-obsessed collectors offering me steep prices for this tape since it does include an exclusive version of "Birth - Fiendish Figuration" that to my knowledge has never been released elsewhere. Several of the bands included here went on to become common names in the 90s German Goth Hall of Fame (or Shame), so you get some early recordings from The House of Usher, Ghosting, The Hall of Souls, etc. along with bands that never got past the cassette circuit. My favorite track is certainly the one by Disorder.