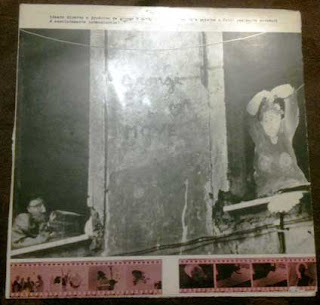 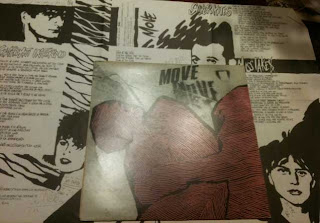 I was about to post Afrodisia Città Libera's "Il Veleno Della Sottomissione" LP few days ago, which I uploaded to mediafire over two months ago (just never had got around to posting it)... and out-of-nowhere a limited remastered official CD edition popped up on eBay this weekend containing their 12" as well... Cool... moving on, here is the next Italian record I had in queue. I was pretty certain that this one had been posted before, but couldn't find it the other day (though the band names don't make it incredibly search engine-friendly).

This is a split between two Italian bands: Move and Gronge. I'm guessing the tracks by Move would be the main motivating factor to check this one out, as it is their follow up to the impressive S/T MLP once posted at Systems of Romance. Everyone I've spoken with agrees the tracks here are not quite as fantastic, but still good quality and in the same general style as the MLP... call it whatever you will: goth, coldwave, postpunk...

I've seen a few other releases by Gronge, but never was impressed enough by the tracks on this release to further investigate. They have an ethic sound with a female lead singer, avant-garde rock, occasional moments of 90's post-Dead Can Dance darkwave...I've heard a few bands in the past that sound similar, but since this isn't the style of music I typically listen to... comparisons are limited. Not horrible, simply not what gets me excited.