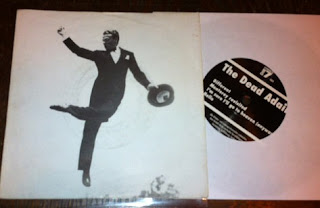 German guitar indie 7" with some slight dark/melancholy touches at times on some of these tracks. The song "Different" is excellent, the last track ("Hello") has a locked loop groove, so I simply faded it out after a couple seconds...

This appears to be their debut release, though a CD (not including these tracks) was later released featuring recordings from 1992-96.